I’ve never had less sleep in 15 days time, and yet, I’ve never felt more present. I’ve also never laughed, cried or sweat more in my entire life than I did in those 15 days. I’ve never made so many friends so quickly, never been a part of so many bus ride sing alongs, never ate so much hummus, and never, ever, ever, felt so much gratitude for a solitary experience. It was the BEST two weeks of my life.

The truth is, my time in Israel was life changing. For so many reasons and on so many levels. I’ve been home three weeks, I’ve recounted my trip to people countless times, and yet, I haven’t been able to find a more monumental or accurate summation of those 15 days.

In the first 10 days we traveled to every major city and tourist attraction known to Israeli. Our days were usually 16 hours long and jammed packed with activities and sights that were equal parts educational, spiritual and just plain awesome. I was so moved by my time in Israel, and having way too much fun, that I just couldn’t leave when the group headed back to the States, so I extended my trip by 5 days. Best. Decision. Ever. The guided trip was incredible beyond words, but extending presented the opportunity to experience Israel from a local’s perspective. Luckily for us, we had become friends with some of the Israelis from our trip, who generously opened up their homes and lives to us for a few days, and so we ate, drank, partied, beached, and explored the cities of Tel Aviv and Jaffa with the greatest tour guides around. I’ll save you the daily play by play, mostly because I’m sure there’s a space limit on this post, and I’ll just share with you some of the highlights and things I learned from my time in the holiest of lands.

I found out quickly that Israelis take their hummus very seriously. And for good reason. Hummus tastes good with everything. Seriously, every. single. thing. In true tourist fashion I tried hummus in as many places as I could; unfortunately, I couldn’t pick a favorite. They were all so damn good, so the verdict is still out.

While there we visited ancient cities, modern shopping malls, desert farms, villages, mountains, parks and beaches. We flew through the cities on highways and roamed the desert on camelback. We saw high end art in Tzvat and street art in pretty much every other city. We hiked Masada, camped in the desert, prayed in Jerusalem, danced in Haifa and surfed in Tel Aviv. We embraced our history and made new connections to last a lifetime. Fun fact: Israel is only about half the size of Lake Michigan.

The land of milk and honey offers so much more in terms of delectable food. It is the land of watermelon and veggies galore, cheese and bread, cakes and chocolate, hummus, Halva and shakshuka. And above all, thank Hashem, it is the land of frozen coffee. 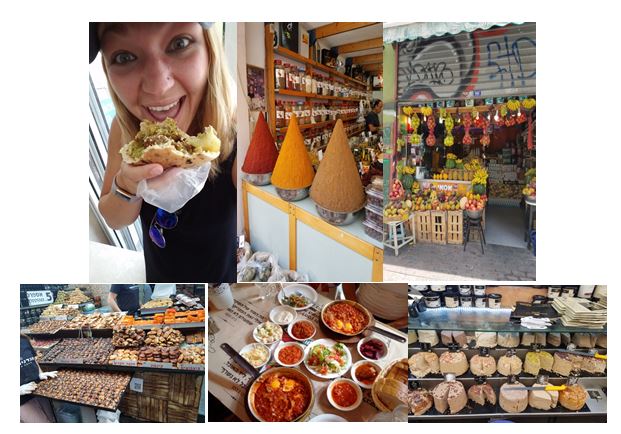 If you order an ice coffee you will get a frozen cup of Frappuccino like goodness, whereas if you ask for a frozen coffee, you’ll get coffee with ice cubes. Likewise, if you go to a bar and want to order a shot, you need to ask for a “chaser.” If you ask for a shot, you will be served a double shot (not that I’m complaining). Fun fact: Tel Aviv has the most coffee shops per capita in the world.

Jewish identity can be as religious or as cultural as you want. On Birthright the participants can range from orthodox to non-practicing, but what everyone has in common is a curiosity to learn, to connect and to explore more about their own Jewishness. Shabbat, for example, was a religious custom I thought all Jews in Israel participated in. As it turns out, the tradition of having Shabbat dinner as a family is more a facet of Israeli culture than the Jewish religion. There may not be candles lit or prayers recited, but Friday night family dinners are a valued and important part of their week. I was lucky enough to spend two Shabbats in the holy land. The second Shabbat fell during my extension. There were no candles and the only prayer uttered came from my cousin, who wanted to show off that she had in fact retained something from hebrew school. What we did have was delicious homemade food, savory wine and a table filled with friends that had somehow come to feel like family in two short weeks. It was by no means a religious setting, but there was an abundance of gratitude, reflection, laughter and love. And if you ask me, that’s what Shabbat is all about. And that’s how every week should begin and end.

The Israeli directness, open-heartedness, and sense of humor isn’t always appropriate, but it‘s charming without fail. And I mean, just look and these beautiful people!

On day one we were a group of about 40 strangers. On day four our group grew to almost 50 with the addition of 8 Israelis. Every day we were split into random groups and every night we had a new set of roommates. By day 10 it felt like we had known each other for years. Some even felt like family. And I can’t explain any of it. We’d have 12-17 hour days everyday and at 10:30 we would be dismissed for bed with drooping eyes and dark circles, yet every night there would be a large group of people hanging out in the hotel bar or outside on the lawn until the wee hours of the morning. When I would read people’s comments about how they left Israel with 40 new friends, I called bullshit. I’m happy to say, I was wrong.

I embarked on this adventure with my sister and cousin and I’m certain I would not have had the same experience in Israel, and not made many of the connections that I did, without them there with me. It’s true that initially they were a sort of comfort zone for me on my first real journey outside of the States, but because of our randomized groups I was thrusted from that comfort fairly quickly. We spent a lot of time apart on this trip, took the opportunity to experience Israel for ourselves and made countless friends along the way. Despite that, I feel like this trip, the time we did spend together, the things we saw, and the emotions we felt were shared experiences that brought us even closer. These girls are my best friends, quite literally my day 1(s). Growing up we were pretty much inseparable, but over the last few years they’ve moved to the opposite side of the country, one for school, the other for marriage. It seems the older we get the less often I get to see them. This trip gave us time apart from the obligatory holiday gatherings to really just reconnect and be present together to experience this once in a lifetime gift. These two have always understood my heart and soul better than anyone and they witnessed first hand (probably before I even did) the changes occurring in me during our time in Israel. Because of that I think they’re the only two who can fully comprehend and appreciate the profound, subconscious changes that took place within me as well as the ones I’m purposefully making in my life now that we’re back. Every single thing that happened and the way everything fell into place on this trip felt like divine intervention. To be in a place that felt like home with my actual family is something I’ll never be able to put into words. 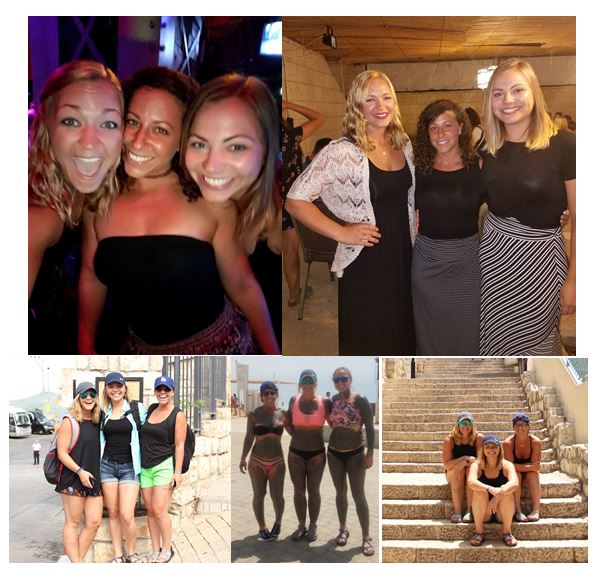 Even though I’ve been home three weeks I still don’t feel like I’ve really had the time to sit and reflect on my trip. I’m so grateful to have had this opportunity and I feel like I’ve learned so much, but the truth is, I think I still have so much more to learn, to discover and to really understand about myself and this incredible place. I came home feeling like a different person. Even my friends have said so. Sounds crazy, I know. But it’s true. I think the fact of the matter is that for anyone who hasn’t been, or didn’t experience Israel in the same capacity that we did, it’s hard to fathom the kind of change and personal growth that can occur in only two weeks.

The greatest takeaway from this trip for me personally was this:

There is no right way to live your life. There is no formula, no specific degree or job, and no one path that will result in ultimate happiness. Prior to my trip I felt like I needed to be constantly moving forward in my life and my career in order to someday be able to have all the things I thought I needed to be happy. But I learned from the Israelis that life is short. That life is more about the journey than the destination. And that it’s ok to take the time to learn about yourself, what you like and don’t like, and what brings you the most happiness before settling into a life you hope will leave you feeling fulfilled.  I also learned that I live to FEEL things. Happiness for me won’t come in the form of a job, a big house, how much money I have in the bank or even from another person. Happiness and fulfillment for me will come in the form of exploration, learning, experiences, challenging limitations and meeting new people.

The places we went, the things we saw and felt, the people we met, even the sunsets…were magical and cosmic and all heart eyes. I’m going to carry all of that in my soul for the rest of my life and moving forward I’m never going to settle for anything less than that feeling.

Special shoutout to these incredible souls for making this trip such an epic adventure. 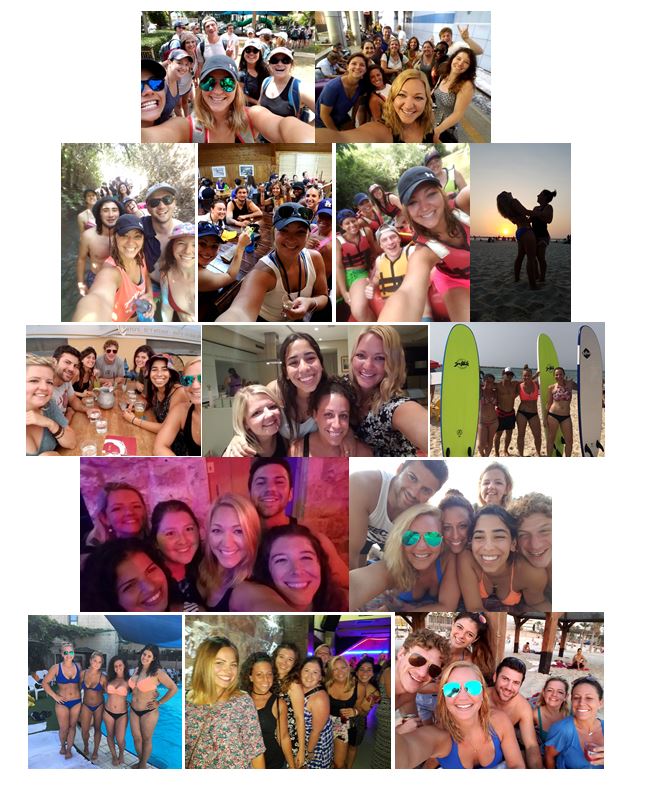 “The journey changes you; it should change you. It leaves marks on your memory, on your consciousness, on your heart, and on your body. You take something with you. Hopefully, you leave something good behind.” – Anthony Bourdain’

One thought on ““Israel is about Sharing & Hummus””